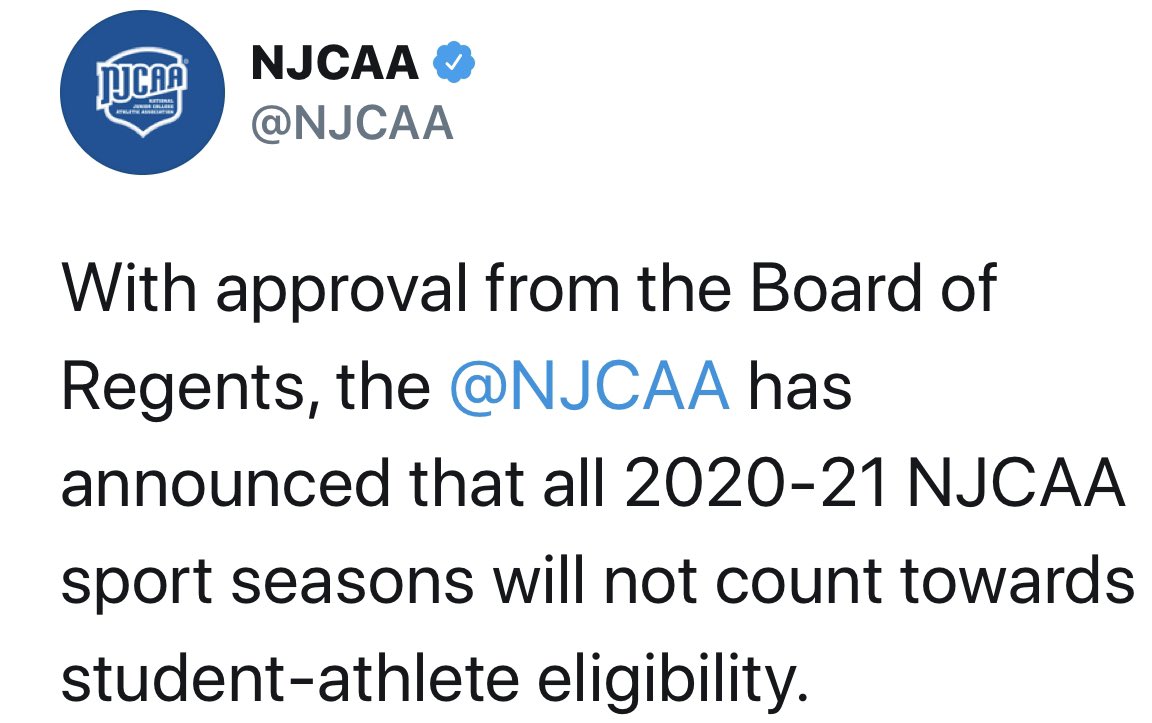 COVID-19 has impacted the world in unimaginable ways. In our little corner, we’ve watched college baseball take punches that had us all wondering if we would even be able to answer the next bell. Entire programs were cut, career coaches lost their livelihoods, thousands of student-athletes had their scholarships taken away, kids were forced to drop out of school, and all of that is just the beginning. Despite the struggles, the worst budget-busting sport on college campuses seemed to survive. We seemed to once again be getting a grip on the situation as the calendar turned to Fall.

Little did we know that the National Junior College Athletic Association had a terrifying Halloween surprise to unleash. At 5:00 PM EST on October 22, 2020, the NJCAA announced that the “2020-21 sports seasons will not count towards eligibility.” Immediately, the question on everybody’s mind is, “Why?” Are they going to shut down the baseball season? Are they trying to help the NCAA balance out rosters? Are they trying to boost enrollment and improve the bottom lines?

This is a very fluid situation with many missing details that will hopefully come to light sooner than later. I’d have to imagine there is good reason, or at least I’m hopeful there is. But, the one thing that appears clear to me on this frantic evening is that the NJCAA made this decision in the shadows. They sent a confusing last-minute email to AD’s and college coaches to inform them of the decision.

Just hours after the announcement, I asked JUCO coaches the one-word question that we’re all wanting to know – Why? Below are the early responses from many well-respected JUCO coaches.

“Not even the slightest wind was caught of this prior. I don’t really have a solid explanation.”

“I got to vote on this through our region and the vote on allowing another blanket year of eligibility was far from unanimous. My guess is the NJCAA is predicting or making a very educated guess on what the NCAA is going to do.”

“Honestly confounded by the thing as are many. My guess would be the NJCAA trying to be proactive to get ahead of an impending COVID 2.0 mess. That, or them trying to even it out for everyone since just spring athletes got it back last year. It is so strange.”

“From what I heard the other day, this decision was made to help the log jam at the 4-year schools. No idea how this helps, though. We’ve told our guys from Day 1 that we are trying to get all of them out. At some point these JUCO kids have to graduate and move on.

“To be honest I have no idea why this decision was made. The only guess I have is because most practices and games in the fall have been cancelled and rosters are very inflated and playing time is probably going to be drastically reduced because of the amount of competition.”

“I have no idea. Just found out. When my boss tells me, I’ll tell you.”

“I’ve got to find out from our AD because I’m so confused with the email we got. I mean, how many years do they expect these guys to stay and play at JUCO? I understand if you come to JUCO and need to take prep classes and need three years to graduate, but keeping kids for yet another year messes up those kids coming from high school since there won’t be any space for them. Plus, financial aid will only pay for only so many hours toward a degree.”

“I’m definitely confused on what to do with recruiting and for our guys right now who will graduate in May, but still be classified as a freshman athlete.”

“It is going to be very interesting to say the least. I’m interested to see how it works with athletes on track to get their Associate degree, but still haven’t used a year of eligibility. I think it’s a huge advantage for those kids. Now, they can transfer as a junior in the classroom and a freshman on the field. This will set them up to be in grad school while playing ball still.”

“I really don’t know much. It’s kind of a shock to us. Really don’t like it or even understand why… they planning to bang our season? Lots of questions here as well.”

“I don’t think it affects baseball players in any way. I’m just going to ignore it. Makes no sense. It’s more for Fall sports and I think NJCAA didn’t want to leave anyone out. It affects less than 1% of baseball players… basically guys who have no plan to move onto a four-year school.”